I Now Have This Unshakable Happiness! – Experience by Seamus Brindley 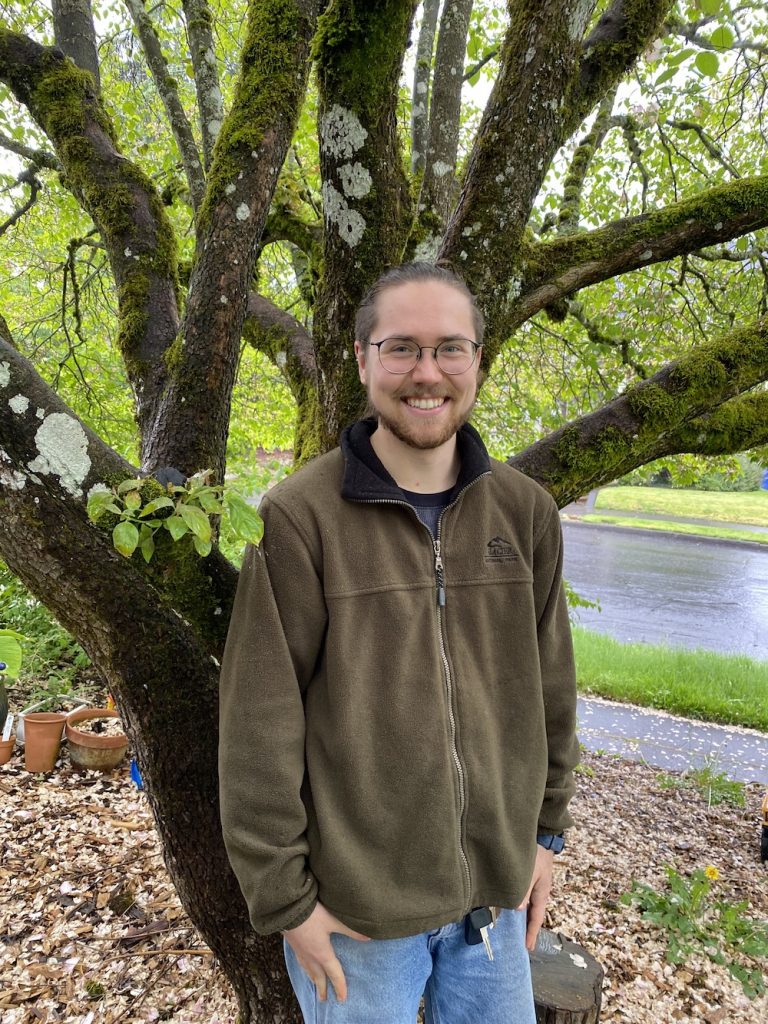 My name is Seamus Brindley, and I am a Portland Hokkeko member. I cannot fully express how much I appreciate the opportunity to share my experience of this practice. I first encountered this practice when I was 16 years old, through my uncle Stephen Burke, who has been practicing for over 20 years now. Steve moved to Oregon shortly before my parents and I did in 2017. For me, moving in the middle of high school, I found it difficult to make new friends. But I am very grateful for having gotten closer with my parents and spending a lot of time with Steve.

Since I was a small child, I’ve struggled with what may be described as “existential angst.” I have been raised in an atheist household; one of the things my parents seem to believe is that your life ceases to exist when you die. I remember asking as a small child, why we bother to be alive, then, if it means nothing and we all just die anyway. My grandmother was Catholic and tried to teach me to pray to God and go to church, but the religion didn’t make any sense to me or give me solace, either. As I became a teenager, I increasingly struggled with what psychiatrists told me was “passive suicidal ideation.” And I hated myself for wanting to die, because I thought I had everything I needed: I have fortunate circumstances with a family that loves and supports me, I do well in school and have activities I enjoy… but I still felt tremendous suffering, all the time. I felt all of my own suffering and all the suffering of others. The result this had on my mental health is what seems to be an increasingly common affliction today, labeled as depression and anxiety.

Seeking help to manage this, I’ve done talk therapy, dialectical behavioral therapy, medication, meditation, etc.  But the waves kept coming, and even if I thought I was ready to face them I never really was, and every time I would get sucked into hopelessness and misery again. I could not understand it. I could not understand why I was suffering, why every living thing was forced to suffer constantly. I could not understand why I was working so hard in life if nothing I did really meant anything, if I would never really be truly happy, if everything hurt. I was overwhelmed by the magnitude of the suffering that beings are subjected to in this world.  Being alive was exhausting, but I was consistently told that I should want to be alive, and I should try my best to let myself keep being alive. No one could ever definitively tell me why that was the case. People close to me, whom I love, tried to make me believe that my life was meaningful and important in some way, but they could never clearly explain to me why it was, because of course they didn’t really know.

I felt guilty, frustrated, confused, and overwhelmed. I wanted to escape, but the only route of escape seemed to be death, and I had been told that killing myself was a very bad idea, and ultimately it wasn’t something I wanted to do. But the pain was constant, and everywhere, and I could see no end to it. The sea of suffering is inconceivably vast. I wanted to turn my mind off, to get away from the unbearable suffering that glared at me from every direction.

When I moved to Oregon, my mental health plummeted. I began attending a mindfulness group for teens in Portland, looking for tools to help me cope with the madness I was experiencing.  Although I did learn a few strategies for managing stress and interpersonal relationships, things only kept getting worse: I had more and more panic attacks and breakdowns, I felt suffocated and trapped. I knew my uncle Steve was practicing Buddhism, and I was curious to learn about it, but I was also afraid. The connotations I had with religion were pretty negative. But one night, sometime around the turn of 2017 and 2018, Steve invited me to a meeting with Reverend Kimura in Vancouver, Washington. Immediately, when he asked me if I would like to go, I felt a sensation that I am still not sure I can describe. My heart was racing, and I was apprehensive but I felt something pulling me towards this practice.  I agreed to go, and after chanting with people I felt full of something I cannot describe yet lighter, much more at ease, and warm. Although I continued to be hesitant and skeptical for a few months, I kept chanting with Steve and going to Hokkeko meetings, and I agreed to receive Gojukai in July of 2018, and then received Gohonzon in October. And because of this practice I am amazed to find myself where I am today! I feel incredibly grateful that I am able to chant Nam-Myoho-Renge-Kyo to the Gohonzon every day. No matter what may be happening in my life, I now have this unshakable happiness from the Buddha. I will never be able to fully repay this debt of gratitude.

When I first got to attend the 2019 Risshu-e ceremony at Myoshinji, I had been practicing for only nine months but had already seen tremendous changes in my life. Of course, I still experience suffering, that is a fact of life. But I am beginning to see the ways in which my own karma functions, view obstacles as opportunities for growth, and I now understand that death is not an escape route. My relationship with myself and the world is continually becoming more compassionate, patient, and understanding. Within my first nine months of practicing, I had only one or two breakdowns; at the same time one year prior I was averaging probably one panic attack every week, and they were much more severe.  Over the past few years I have continued to experience such profound benefits from this practice, it is really amazing!

One of the first Gosho passages I studied with Steve was “The Eight Winds,” which states:

“A truly wise man will not be carried away by any of the eight winds: prosperity, decline, disgrace, honor, praise, censure, suffering and pleasure. He is neither elated by prosperity nor grieved by decline.”

I now have no doubt that this practice is in fact the key to true wisdom. Though these winds thrashed me about earlier in my life, by chanting every day I have now become able to remain more or less upright. The winds will never cease blowing, but with consistent and correct practice, one can live peacefully in the midst of them. This wisdom motivates me to do shakubuku: I see how much suffering others are subjected to because they are carried away by these winds, and I know that the only way I can help their lives is to plant the seed of Myoho-Renge-Kyo. The immense suffering which exists in the Latter Day of the Law is definitely overwhelming, but now that I am beginning to see the True Law, I am also beginning to understand who I am and what my place is in the midst of all of this. I will help others to encounter the Law and gain the wisdom of Myoho-Renge-Kyo which leads to true happiness.

I am now 21 years old and living a joyful life rooted in daily Gongyo and Shodai. From the time I was 11 and significantly struggling mentally, I really could not fathom that I might survive through high school, let alone pursue my passions in fulfilling work experiences and studies at college.  For many of the years of my yet short life, it was a daily battle for me just to withstand the winds. I am so unbelievably happy to have encountered this practice and have the opportunity to share it with others. I am determined to chant Nam-Myoho-Renge-Kyo everyday and put forth my best efforts to do shakubuku so that worldwide Kosen-rufu can be realized.

Thank you so much for letting me share this with you. As I initially stated, I cannot express my appreciation enough; I owe an inconceivable debt of gratitude to the Gohonzon. Just as the Daishonin wrote in the Gosho, “On Practicing the Buddha’s Teachings”: